Labor and Delivery Medications: What’s the Impact on Breastfeeding? 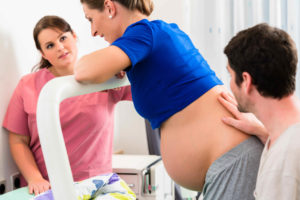 In a previous post, I talked about reasons why medications might be used in labor and birth. Here, I’ll discuss a few medications that are commonly given during labor and birthing, and their impact (if any) on breastfeeding. I’ll organize them alphabetically.

Butorphanol is a synthetic analgesic (“pain killer”) that can be given in labor. It can also a component of postpartum patient-controlled analgesia (PCA). While I’m cautious about giving any analgesics in labor, Halder and colleagues reassure us that “[b]utorphanol has higher potency and fewer side effects even in laboring mothers and their neonates, with a low chance of dependency.”

Fentanyl (common trade name is Sublimaze®) is a narcotic pain-reliever. Honestly, fentanyl has always scared the daylights out of me. It is 50-100 times stronger than morphine. Fentanyl can be given by several routes. However, in labor, it’s frequently — if not always — one of the medications in the epidural infusion.

Yet, the Academy of Breastfeeding Medicine, points out that very little fentanyl is found in the mother’s milk, and it is not very bioavailable.

Labetalol is likely to be given IV if the client has high blood pressure. Low levels of labetalol have been found in milk, so in theory, it shouldn’t be a problem.

However, an earlier report described a pregnant woman who suffered from Raynaud’s phenomenon of the nipple during three different pregnancies. A more recent report was similar. This adverse effect appears to be rare, but possible.

Lidocaine is just one of the many medications in the “caine” family, which is typically used for local anesthesia. (Dentists offer “Novocaine”.) I’ve seen lidocaine, Marcocaine, and similar “caines” routinely injected into the perineum in anticipation of an episiotomy.

Does it affect breastfeeding? Some contend that it does. However, I’ve seen “caine” injections given more times than I count in clinical practice, but I cannot recall ever having suspected that as a culprit in poor sucking later. And, the Academy of Breastfeeding Medicine doesn’t think it’s a problem.

Magnesium Sulfate (or, in colloquial terms, “MagSulf”) is sometimes used to stop preterm contractions because it makes the smooth muscle of the uterus become flaccid. (This use varies by locale.) It is also used to for high blood pressure in labor. (This is a highly oversimplified explanation, but…)

In my opinion, we don’t have good scientific data on how MagSulf affects breastfeeding. But I can tell you that I’ve seen babies who have been exposed to MagSulf prenatally, and they often have a weak suck. Cause and effect? Who knows? One nurse’s observations do not a study make.

Methergine® is a medication used to control profuse bleeding shortly after a birth. (In my experience, IM doses are more likely to be ordered in the immediate postpartum period, and, if needed, oral doses for a few days thereafter. IV administration is discouraged.)

There was a big kerfuffle about Methergine® a few years ago, based on a “study” which was the most utterly flawed study I’ve read in years. Now there’s evidence that methergine does not have an adverse effect on breastfeeding. And, for years, the World Health Organization has been saying that it is compatible with breastfeeding.

I know. Morphine sounds scary. But actually, some would contend that it’s one of the best medication choices for pain relief in labor. Historically, I’ve been pretty stingy with administering any kind of analgesic to a laboring woman, but I’ve certainly given morphine. However, the Academy of Breastfeeding Medicine says, “The administration of moderate to low doses of intravenous or intramuscular morphine … passage to milk and oral bioavailability are least with this agent.”

You could argue that all of these analgesics affect the baby’s neurologic status, at least to some degree. I think you’d be right. But evaluate this information for yourself.

Nalbuphine (commonly brand, Nubain®) can be given to reverse the effects of in-utero exposure to analgesics given in labor. We know that nalbuphine is excreted in the mother’s milk. Although studies are limited, we know that the amount secreted is very small, and that oral bioavailability is poor.

Synthetic oxytocin (common trade name, Pitocin®) administered during labor has several infrequently -mentioned adverse effects These include higher cortisol levels, increased likelihood of formula-feeding; multiple studies have shown possible problems with sucking. One study showed some relationship to attention deficit disorder. We’re a long way from claiming a cause-and-effect relationship, but certainly, this data is should give us caution.

These are not all of the labor/delivery medications you’ll ever need to know. However, this post should help you get started as you prepare for real life, or as you are preparing for the IBLCE Exam.

Do you feel confident in your knowledge the impacts of labor and delivery medications on breastfeeding? Tell me in the comments below!