I was astonished to learn how many women struggle 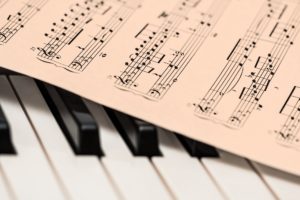 with postpartum anxiety (PPA). So I asked Sandra Reich, host of StraightTalk and a therapist specializing in anxiety and depression, to be my guest on Born to be Breastfed. She proposed several nonpharmacologic modalities, including music to
help new mothers overcome PPA.

Is there proof that music has a therapeutic effect?

There’s scientific evidence to support the approaches Sandra suggested. Now you have even more reason to turn on your tunes—and remember, it’s good for breastfeeding too.

In the first hour of life…

For example, Akca’s study (2014) showed that suckling was more likely during the first hour of life when soothing music was played. From the study design, we cannot assume cause and effect, but it’s tempting to think that it may have as much effect on reducing the mother’s anxiety as it might on helping the baby to relax and suckle.

Coping with anxiety if baby is in the NICU…

Ak’s study (2015) asserted that music therapy can reduce maternal anxiety and increase coping among of newborns who are in the in Neonatal Intensive Care Unit (NICU).

Keith’s 2012 study looked at the volume of milk that mothers of preterm infants could obtain with an electric pump. One group pumped as instructed. The other group pumped in the same way, but listened to music while doing so. The researchers found that mothers who listened while they pumped their milk were more likely to produce a greater volume of milk!

We all know that without relaxation, mothers cannot achieve a good let-down. Music might be an overlooked way to prevent or resolve that, and related issues. There is no need to “teach” the mother how to use it; just a simple suggestion that she access it on her smartphone or other devise is all the “teaching” that is required.

Have you tried music yourself, or suggested it?

Music is either no- or low-cost. It has no side effects. It has been proven effective for relief of general anxiety and pain, and has also been proven to help with milk production and ejection, and breastfeeding initiation. There is seemingly no reason to not suggest it!

I would be willing to bet that most of us don’t suggest it because we simply don’t think of it, or we dismiss its effectiveness. It’s time to listen to the research and encourage our mothers to tune in, too.

What effect does music have on your mood? Share your thoughts in the comments section below!

Breastfeeding After Sexual Abuse: How Can We Help
Spouses, Partners, and Others Who Pressure You to Wean